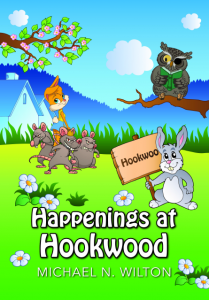 When the animal wildlife in Hookwood is disturbed by the arrival of a young couple eager to set up their first home together in a derelict cottage, an inquisitive young rabbit called Startup decides to help out by finishing off their picnic lunch, donated by an old friend to celebrate the occasion. As a punishment, his mother Dora sends him out to look after his scatty friend, Clara Goose, while she moves house to escape the attention of the young couple’s pet, a fearsome black cat.

After restoring the lifetime savings of his friends, dubiously acquired by Squirrel Nabbit, the rascally pawnbroker, Startup sets out to prevent Clara’s nest egg falling into the hands of a smooth talking brown rat known as Captain Mayfair, who is looking for funds to back an uprising led by the fearsome King Freddie and his brown rat colony.

Regarded as a threat to the success of the Captain’s plans, Startup is encouraged to fall under the spell of the brown rats secret weapon, a slinky looking rabbit called Lola, who is sent to ensnare the trusting rabbit and get him out of the way.

After a series of escapades where he is helped by his friends, Prudence and Wise Owl, as well as Puggles, the pig and Hedgie the hedgehog, Startup is involved in a running battle with the brown rats, and soon finds himself in direct confrontation with the arch villain, King Freddie himself.

In a gripping climax, Startup is caught up in a desperate hand-to-hand battle to the finish with King Freddie, in which his friend Wise Owl comes to his rescue, ready to sacrifice his own life in doing so.

Goodreads reviews for Happenings at Hookwood